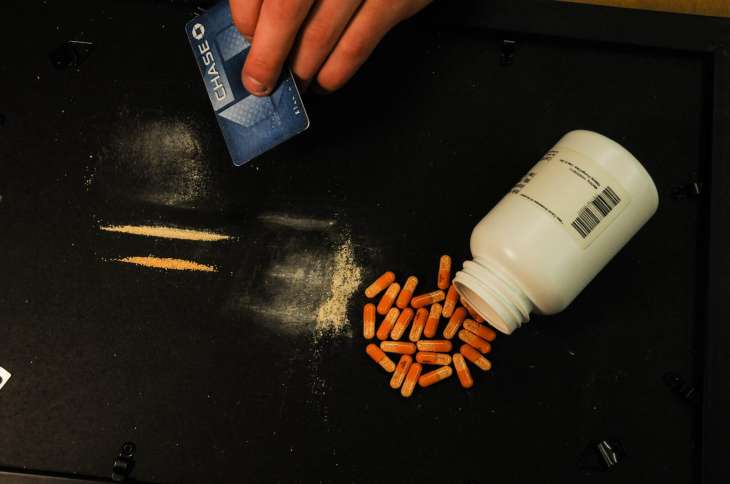 Many college students the world over have heard about snorting Adderall as a study aid. Others have used it recreationally just to get high. If you’re thinking about doing it, however, we’re here to explain to you why you shouldn’t.

While snorting drugs like Adderall might seem like fun in the moment, it poses some serious risks down the line. Here we will look at some of the detrimental effects that Adderall abuse can have on the user.

When snorting Adderall, the user releases a massive concentrated dose of amphetamine and dextroamphetamine into their bloodstream.

Whereas taking an Adderall pill orally allows the time release medication to be slowly absorbed in your bloodstream via your GI (Gastrointestinal) tract, snorting it actually releases all of Adderall’s ingredients quite quickly.

When Adderall is snorted, it is absorbed by the mucus membrane via the sinus passages in a matter of minutes, swiftly crossing the blood-brain barrier.

At first, you will likely enjoy the effects of the drug as an overwhelming sense of euphoria takes hold. If you’re cramming for a test or presentation, you will probably be happy to find that your focus and concentration intensify.

But this overwhelming sense of excitement can lead to some pretty acute side effects and it is worth mentioning that taking Adderall nasally nullifies the beneficial effect the drug typically has on those afflicted with ADHD (Attention Deficit Hyperactivity Disorder).

That’s not just a cheesy reference to Fear & Loathing in Las Vegas, it’s actually a very real side effect of snorting Adderall. The aforementioned excitement can quickly overwhelm the user, leading to nervousness, panic and fear.

As one user on Reddit said of his experience abusing Adderall, the feeling of doom and fear caused “sheer horror and panic.”

Due to the influx of amphetamine and dextroamphetamine crossing the blood-brain barrier so quickly, snorting Adderall can result in an increase in blood pressure, shortness of breath and respiratory disturbance.

It is not uncommon for snorters to suffer from a rapid heart rate or chest pain while abusing Adderall.

It has been proven that Adderall can cause hallucinations in those who are prescribed the drug to treat ADHD (Attention Deficit Hyperactivity Disorder), so it should come as no surprise that it can also cause these same symptoms in those who take it recreationally.

For those thinking about snorting the stuff to get all geeked, you might want to think twice unless you intend on a very unpleasant vision quest. Especially when you consider the potential for short and long-term psychosis.

Back in 2010, ABC News covered the Adderall abuse epidemic, noting the ways in which the drug can alter your brain. In their article, they reference studies that were conducted at UCLA which demonstrate that Adderall alters brain function, leading to cases of psychosis and suicide.

A user on Reddit recounting his experience said, “During finals in college I had to stay up for 4 days on Adderall (because i procrastinated on my thesis). I was going really nuts by the end, I kept thinking ‘you need to find a clearer definition of God’ and seeing shadows dart in my peripheral vision.”

There has even been much debate as to whether or not Adderall can cause schizophrenia. In a letter of warning that was penned all the way back in 1957, P.H.

Connell published a report in the British Medical Journal saying, “A common result of amphetamine intoxication is the development of a paranoid psychosis indistinguishable from schizophrenia, during which the patient may be a serious social danger.”

That’s right, kid! Gettin’ geeked on Adderall can make you go from dopey to droopy in no time at all. As one Reddit user subtly noted, “My d**k is totally useless while on Adderall.”

Another user concurred, saying, “Vasoconstriction makes it near impossible to get/maintain an erection. Sex drive goes up a bit which makes it counterproductive.”

Some users have raved about a severe uptake in their sex drive while many others have bemoaned the drug’s negative effect on their libido. One thing’s for sure, it is hardly worth getting high off Adderall if it means that Mr. Mojo won’t be rising.

Seizures are very common among Adderall users, even those in good health. Snorting Adderall increases the likelihood of experiencing such symptoms.

Over at the Epilepsy Foundation’s Community Forum, a parent expressed concern over the seizures his daughter suffered shortly after taking Adderall for her ADHD.

What this tells us is that Adderall-related seizures are not only a typical side effect of taking Adderall with a prescription, but that there is definitely the potential for such an attack if one abuses Adderall.

Adderall abuse doesn’t only carry negative side effects, it also carries the risk of landing you in the hospital or even in the grave. Among the many dire consequences of Adderall abuse and addiction is the user’s potential to go into cardiac arrest.

According to the Drug Abuse Warning Network, between the years 2004 and 2011, there was a 650 percent increase in emergency rooms visits among people who had taken Adderall.

Along with hypertension, damage to the inner lining of the heart and arrythmias, cardiac arrest was one of the top causes behind these hospital visits.

Easily the most extreme side effect of all, insufflation of Adderall can lead to the user lapsing into a coma. There’s nothing to really say about this one other than…what do ya think? Is it really worth risking the big sleep just because you don’t wanna get a bad grade on your thesis?

Because so much amphetamine is delivered directly to your system in one shot, snorting Adderall is an abuse of Adderall and one that can easily lead to overdose. In fact, overdose is one of the major potential dangers of snorting the drug.

By delivering the entire amount of Adderall’s ingredients to the bloodstream all at once, snorting can result in immediate or near-instant overdose. Overdose can lead to all of the above side effects and much, much more.

The buck doesn’t stop there, folks! The fugly symptoms of Adderall abuse are not limited to the above. In addition to the worst of the worst, there are also all of the following:

That pretty well covers all of the reasons why you should think twice before crushing up Adderall and snorting it. But maybe you already know someone who is snorting Adderall? If so, they may be already be addicted to Adderall.

If you’d like to seek help for this person, or for yourself, you can reach out to the people at the Addiction Blog here