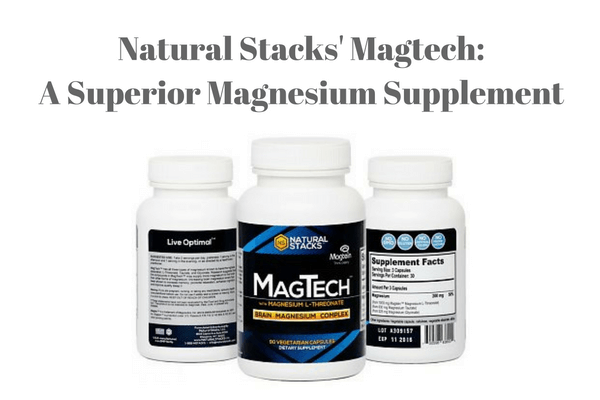 In this article, we will discuss how Natural Stacks’ Magtech™ differentiates itself in a supplement market that is filled to the brim with various magnesium products.

Many people use magnesium supplements for either enhanced memory or reduction of anxiety, so it acts as a nootropic in a sense. The ingredients and idea behind Magtech™ will be covered, along with a firsthand review of its effectiveness.

We all need magnesium. It regulates our muscle contractions, keeps our overactive nervous systems in check, and makes up part of our skeletons. Despite our need for magnesium, as much as 48% of the United States’ population isn’t getting enough of it, leading to possibly underestimated health consequences.

Magnesium supplements, which take on a number of different “salt” forms, are often the key to fulfilling the body’s requirements. With all the possible choices though, you want to select the salts that your body can most easily absorb and extract pure elemental magnesium from.

While many vendors offer their own magnesium-based products to combat this issue, Natural Stacks has dared to create a stack of their own called Magtech™ which combines some of the best possible salts based on scientific literature. The question is: have they made a product that provides a superior experience for cognitive enhancement?

The description of the product is simple. Magtech is a combination of three magnesium salts – threonate, glycinate, and taurate.

Natural Stacks claims that these three forms are the best-absorbed into the brain specifically, making it clear that this is a nootropic venture. It’s also worth mentioning that the amino acids used to bond these salts are functional in their own right, having effects beyond the metal itself.

With a higher yield of magnesium to the brain than other similar products, a greater magnitude of positive effects such as better sleep, lessened anxiety, and enhanced memory can be realized.

Many of the cheapest magnesium supplements can barely be used by the body, or can even be considered harmful! For example, consider magnesium oxide which the body can absorb only 5% of elemental magnesium from, or magnesium sulfate which can cause diarrhea in supplemental amounts.

Compare that to the salts in Magtech, which each have an absorption rate of around 30% or above. Plus we have the benefits of the amino acids contained within! Let us take a look at the three specially-selected compounds:

The threonate salt is considered to be a “rising star” of sorts in the realm of magnesium supplementation research. While all cells can uptake magnesium ions to a degree, the nervous system specifically is targeted by the threonate form. This form has been shown to increase the brain’s neural plasticity by heightened activity at NMDA receptors. For those that are looking to improve their learning capacity, Magtech is a great choice thanks to the inclusion of magnesium threonate to the mix.

Energy drink nuts will immediately recognize the root word of this magnesium salt – taurine. This compound is not only effective at transferring magnesium metal into your cells, but the taurine bundled in has its own benefits. It curbs extraneous stimulation by acting as a GABA A agonist, which synergizes with magnesium’s innate relaxation effect and explains its addition to energy drinks, which are riddled with stimulating caffeine.

Finally, we have magnesium glycinate, which bears a similarity to taurate where the bonded amino acid has an inhibitory effect on the nervous system. In this case, glycine receptors in the spine activate a similar pathway in the brain as taurine. In addition, magnesium glycinate was once considered the number one salt for bioavailability, just behind threonate.

So let’s start with some quick background information.

I’m definitely a person who benefits from supplementing magnesium. My diet isn’t particularly heavy in food that typically contain it such as grains, beans, certain nuts. I also regularly take proton pump inhibitors (omeprazole) for stomach acid reduction. These factors both put me at certain risk for magnesium deficiency, which makes me a perfect candidate for a Magtech experiment!

Natural Stacks recommends that you take a serving of Magtech (3 capsules) during the later half of the day (afternoon and evening). This is probably because magnesium can be used as a sleep aid, and the ingredients in Magtech contribute to a sense of relaxation. I followed this exactly as they said, taking the capsules at around 8pm for about a week in order to observe effects.

The first thing I noticed about Magtech was the take-able size of the pills.

It was somewhat relieving to notice that the capsules themselves aren’t huge. Many other magnesium supplements I’ve taken in the past tended to be both large and with flat edges on the sides, making them difficult to swallow. These were size 00 capsules with a white powder inside, and I found them perfectly easy to take. Of course, there was also no taste to comment on due to the encapsulation, which is often a good thing when it comes to nootropics.

Over the next several days, I noticed consistent but mild effects when taking my serving of Magtech in the evening.

This is certainly not a supplement where you can feel the effects immediately and strongly. It does take a few hours, at least in my case, to kick in. However, once you remember you’ve taken it, you notice how real of a change has occurred.

Now what I like about magnesium supplements (in general) is that they offer a sense of relaxation, but not to the point where you feel forcibly sleepy or “out of it”. Magtech does seem to offer a slightly more sedative effect at nighttime than other magnesium supplements, but still nothing that affected my ability to think at all. It’s really hard to describe the feeling of being on this enhanced magnesium booster, but it’s like drinking a big cup of relaxing tea. Perhaps even cleaner of a feeling than that.

What I found pleasantly surprising is that in the mornings after taking Magtech, my brain felt more primed for absorbing information. It wasn’t a stimulatory effect causing this, but it’s more like I could sit down with a propensity to observe and learn. As someone with a type 1 personality, I sometimes have trouble relaxing to the point of facilitating a situation like that. Even driving to work in the morning felt a bit more enjoyable because I wasn’t stressing out as much during stop and go on the highway.

Before taking Magtech, I did know that taking magnesium is also helpful for your muscles, where depletion can occur with regular exercise and simple lack of intake. I did notice that after weightlifting, I felt less achy than I would normally during the typical day-after soreness period. This was also quite welcome, and not nearly as noticeable when taking previous magnesium supplements. On the other hand, my muscles were more relaxed, but I didn’t feel it adversely impacted my performance.

While taking Magtech, I didn’t experience any side effects other than what you should expect from loading up on magnesium. To put it simply, I felt overall more relaxed throughout my days, which does impact your behavior slightly. I’m the type of person who normally speeds through things – whether it’s doing work, house chores, or even walking and driving. Under the influence of Magtech, I felt like I could slow down a bit throughout these activities.

Again, other than that, nothing at all to complain about!

Magtech from Natural Stacks has proven to be not just another magnesium supplement, but a better one. I noticed a distinct boost of power of effects during my trial with it, after having tried numerous similar products in the past.

This is undoubtedly due to its cutting edge versions of magnesium salts, with synergies that aid in promoting relaxation and calmer thought. It’s certainly worth a continuation of regular use, for me, and I would recommend it to anyone else.

Natural Stacks is a company dedicated to “optimal performance for everyone”. Founded by a duo known as Roy and Ben, they believe that supplements should have quality and true power behind them, not just marketing hype. Check out Magtech™, CILTEP, and other great products at NaturalStacks.com