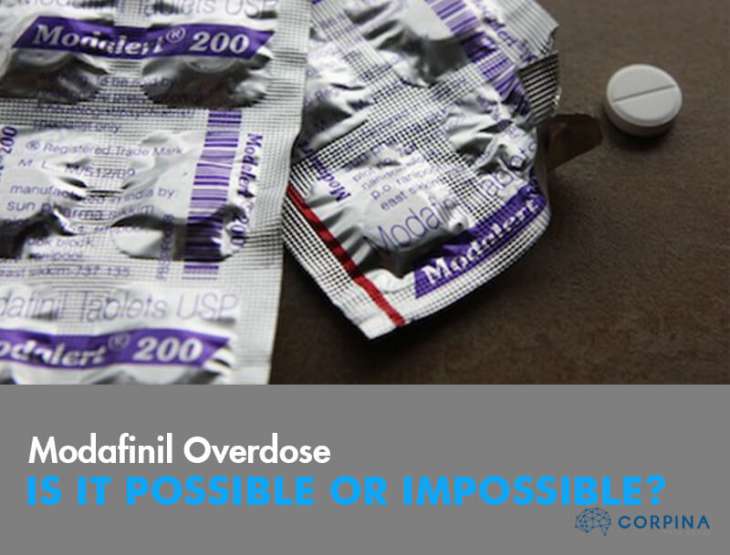 Modafinil is a eugeroic or wakefulness-promoting agent that is used by medical practitioners for the treatment of adults with various sleep disorders such as shift work and narcolepsy.

Although this prescription medicine is found highly effective, there are still issues surrounding it. One of these is Modafinil overdose.

Today’s post will shed light on this imperative matter.

Possible. It is very easy for one to overdose on any drug.

Having an overdose of Modafinil or any other drug essentially means that your body has a lot of measure of the drug more than it can handle that consequently the body becomes poisoned.

Can You Die From Modafinil Overdoes?

Clinical trials were conducted to observe whether one could overdose on Modafinil.

Amounts of about 1,000 mg to 1,600 mg a day were administered to some test subjects. The dosage given to these people exceeded the normal amount of the drug administered normally by up to 8 times that of the recommended Modafinil dose.

These huge amounts were continuously administered to the test subjects for a period of approximately 21 days.

The experiments and observations continued and the test subjects were given seriously huge overdoses of 4,000 mg to 4,500 mg which is totally extreme for any individual.

The conclusion of the experiment was that it was not possible for an individual to die or experience serious health problems as a direct relation to an overdose of Modafinil.

Modafinil has been since released to the public and there have not been cases of death related to the Modafinil overdose alone.

Overdoses of Modafinil have only been reported when related to use with other drugs simultaneously. Even a small kid of up to 11 months old can take 800 mg and survive.

Since its release to the public, Modafinil has not resulted in cases of accidental ingestion by kids.

How Much Is Too Much?

The Modafinil dosage that can prove lethal to the body ranges to amounts up to 12,000 mg which is an exorbitant amount for an individual to take.

In any instance of an overdose of Modafinil, it is crucial to monitor their heart rate as Modafinil raises contradictions with the heart and considering that many people suffer from heart complications.

In a case of absence of significant complications from the overdose, there is no need to worry and a simple stomach pump will get things back to normal.

Though one cannot overdose on Modafinil, it still has some risks such as:

While Modafinil overdose is possible, there have been no reports of lethal effects to date.

However, you must still proceed with caution. Remember to consult a medical practitioner prior to using the drug to avert problems associated with its use.

Funny that you say it’s easy to od on moda then continue to explain that it’s actually impossible to do that.

I just reread the article and the wording seems clear to me. “It’s possible. Overdosing on any drug is possible.”

This is factually correct. You can overdose on water (https://www.webmd.com/fitness-exercise/features/water-intoxication).

But, it’s very unlikely and you’d have to take a lot.

Likewise, you can overdose on Modafinil if you take wayyy too much.

Thanks for triggering the discussion, though 🙂

What’s the source of the info/link to the study you mention? Any facts to back up these claims?

I was wondering in these “overdose” trials, what were the “advantages” of that much dose?(I doubt they would necessarily say for fear of someone attempting those doses) Did the test people experience radical concentration or memory? INcrease of production up to a certain level? For a double-blind study, I would imagine they would’ve tracked those results, as in “the “benefits” leveled off at XXXmg/day”. Can you reference that study? Thanks.