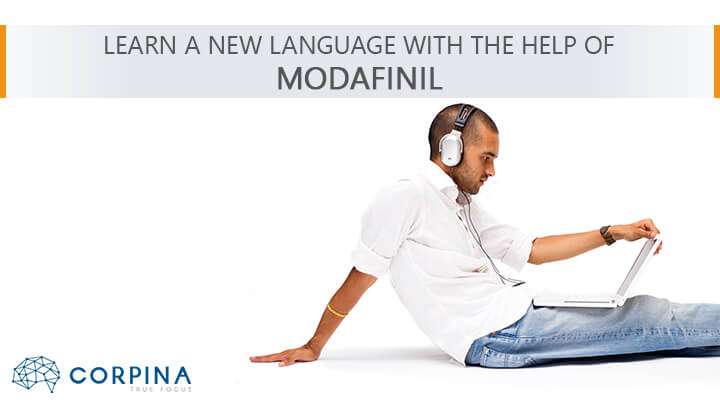 I’m not naturally talented when it comes to learning languages. I see those polyglot guys on the internet, who can speak up to 10 languages fluently, and I wonder if we should be burning them for witchcraft. I’ve spent well over a thousand dollars on language courses, but I don’t have much to show for it.

I do always manage to pick up some basic vocabulary (guten tag), but when it comes to having conversations in a foreign language, I struggle to stay afloat like a life-raft made of lead.

I sort of feel it’s a bit embarrassing to only speak one language, and this is why I’ve become interested in how smart drugs like Modafinil might improve my ability to learn.

There’s a misconception people have when it comes to new languages. While learning a new language is not always simple, it doesn’t have to take years.

There are a number of theories about how we go about learning languages. Language instructor and ESL teacher Judie Haynes believes that humans pick up a new language in stages that include:

It can take anywhere from 4 to 10 years to move from pre-production to advanced fluency, but this assumes you are going to be making a steady effort. A lot of experts agree that Malcolm Gladwell’s 10,000 hour rule on mastering a skill probably applies to language as well.

This would mean I’d need to study for 38.5 hours a week for five years in order to become fluent. I can only afford to spend about 1 hour a day on this type of study, so this means it would take me almost three decades to master a language! I need some type of shortcut to have any hope of becoming bilingual.

I’m dubious when I hear claims from people claiming to become fluent in a new language in 90 days. It does sound more reasonable to suggest that even those of us who are not some type of language savant could reach intermediate fluency in a couple of years with the right tools.

I’d be happy just to be able to have a conversation in another language. But hey, maybe a smart drug like Modafinil would boost my language-acquisition abilities enough for me to be able to super-charge my daily one-hour lessons so I progress faster.

How Modafinil Can Help with Language Acquisition

Modafinil is just one of a number of nootropics that have been mentioned as a possible chemical aid in language acquisition. This substance is best known for its ability to promote wakefulness and alertness, but it is also a cognitive enhancer.

One of the things that most attracts me about this particular smart drug is that it is said to be good for improving focus. I have a tendency to slip into daydreaming during my language study time so an improved ability to focus should definitely mean I absorb more information.

There is still some uncertainty as to the exact way modafinil works in the brain but it is believed to bind with a number of different receptors. In particular, it increases the release of dopamine and norepinephrine, and it has also been shown to increase hypothalamic histamine levels. These changes to the chemical mix in the brain increases alertness and is also said to improve impulse control.

There are six important skills involved in learning a new language including: speaking, listening, reading, writing, pronunciation, and memorization. Studies have shown that modafinil is effective at improving memory, so this should make it easier to remember new words.

Some languages like Chinese and Thai involve learning tones, so it sounds reasonable to assume that modafinil would improve my ability to remember these. I find reading and writing to be the easiest part of learning a language because it is just a case of building a large enough vocabulary.

A word of caution

Modafinil is probably going to help with some language acquisition skills, but it might not be so effective when it comes to things like speaking. Some people who have used the nootropic in the past claim that it makes them feel less-sociable, and this isn’t so good when trying to learn a foreign tongue.

It is also important to consider the potential side-effect of this drug such as tunnel-vision, irritability, and mild insomnia. The best solution might be to use modafinil when focusing on reading, writing, tones, and building up vocabulary but avoid it working on speaking and listening.

Other Nootropics for Learning a New Language

I’ve only had time to consider the potential of modafinil for language acquisition, but there are lots of other options – in fact, some of these other smart drugs might be better (I plan on writing more fully on these in the future). What I’ve heard so far is that:

It is usual for people using nootropics to learn a new language to have a ‘stack’ including a number of different substances. This makes sense because there is not yet one smart drug that is capable of promoting all the different skills needed to pick up a foreign language to a near fluent level.

It seems that there is no combination of smart drugs that works for everyone, so it is probably going to be necessary to do a bit of experimentation to find the best stack.

I think it’s great there we have some wonderful new technology that makes it much easier to communicate with people from around the world. My favorite is MimicMethod, an iPhone app that analyses what I’m saying and turns it into a different language – it also translates foreign words into English.

Curious whether these language “gurus” used nootropics themselves, I reached out to Idahosa Ness, the founder of MimicMethod. He had this to say:

Funny enough the only substance I could conceive of helping the language learning process is alcohol. Language is a “learn-by-doing” type of skill, which means its essential that you make mistakes and maximize “output”, i.e time spent trying to express yourself in real social contexts.

As we all know, alcohol makes you more “social” by reducing your inhibition to talk to people. It also reduces your anxiety about making mistakes, which actually causes you to speak even better because you do it more naturally. Of course when you’re “drunk” you just get stupider and end up speaking worse, so I would only recommend the minimum effective dose needed to get you “buzzed” and socializing.

As a disclaimer, I rarely drink myself since it’s terrible for your health, but there’s no denying its benefits, so like anything else, I recommend people to evaluate the tradeoffs.

Though MimicMethod is my personal favorite, but it’s just one of a handful of amazing language learning apps that do the trick. Other apps worth checking out: DuoLingo, Anki, Memrise, and the PimSleur Method, to name a few.

These tools can be a bit buggy, but I’ve no doubt that within a few years we are going to have technology that flawlessly allows us to communicate with almost anyone on the planet. It’s tempting to think that learning a new language might be a bit of a waste of time.

The reality is that it doesn’t matter how much better the technology becomes, there is probably always going to be a need to learn foreign languages. This is because language is the key to a culture, and there is far more to it than just words – there can be a serious loss of meaning when translating things word for word.

Conclusion – give it a shot

Leaning a new tongue is about seeing things from the perspective of a different worldview and you can’t get that from an app. It has also been shown that learning a new language is good for the brain because it improves mental abilities such as multi-tasking.

There is even evidence to suggest that becoming bilingual can delay the onset of Alzheimer’s. It’s pretty clear that there is always going to be value in learning a new language, and this may much easier to accomplish with the help of smart drugs like modafinil.

Click Here to Leave a Comment Below 1 comments
3 Life Changing Skills You Can Master In Just 3 Months - Take control of your health! - July 6, 2016

[…] there are countless apps, websites, and even supplements that make language-learning fun and […]