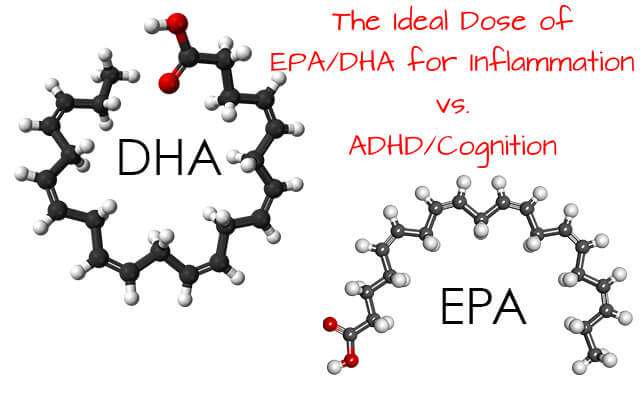 The Ideal Dose of EPA/DHA for Inflammation vs ADHD/Cognition

Over the past decade, we’ve been hearing more and more about the importance of getting enough Omega-3s into our diets. Although new health fads are often more hype than fact, the magnitude of both physical and mental health benefits associated with fish oil simply can’t be ignored.

EPA and DHA supplementation on a daily basis can help manage a number of health conditions – from inflammation to ADHD and cognition. However, unlike pharmaceutical drugs, it doesn’t always come with exact dosing instructions.

Knowing the ideal dose of EPA and DHA required can be a bit of a mystery. This article will answer all of your questions.

What are EPA and DHA?

It’s essential to know what EPA and DHA actually are first before getting into the details. Below is a brief discussion.

High-quality fish oil contains essential fatty acids (EFA) which are polyunsaturated fats that our bodies are incapable of producing on their own.

Polyunsaturated fatty acids come from alpha-linolenic acid and linoleic acid, which you may have heard of as Omega-3 and Omega-6.

Most people consume a diet which has enough Omega-6, however, the majority of people tend to consume insufficient levels of Omega-3.

When you consume Omega-3, it is broken down by the body into docosahexaenoic acid and eicosapentaenoic acid, also known as DHA and EPA.

Research has already shown just how important consuming the correct doses of EPA and DHA are for both the development of brain function and vision, especially in infants and young children. As well as helping a number of chronic diseases such as Cancer, Cardiovascular Disease, coronary heart disease (CHD) and Depression.

There is also a vast amount of research currently ongoing into the importance of EPA and DHA in supporting mental health.

One study in France looked at people who had attempted suicide and found their red blood cells contained extremely low levels of EPA. This would suggest that supplementing with Omega-3 could prevent suicide as well as showing the significance that the correct levels of EPA and DHA have on your mental health.

Ideal Dose of EPA and DHA for Inflammation

One of the most notable benefits of Omega-3 fatty acids is combating inflammation.

The use of non-steroidal anti-inflammatory drugs (NSAID) has been used for many years as a way to manage both acute and chronic pain and inflammation. However, many of these drugs when used long term can not only become less effective but can also lead to chronic side effects such as bleeding, stomach ulcers, and even death.

Research is now suggesting that a safer alternative to NSAID could be Omega-3 supplementation.

In one study 250 people were given 1200 mg daily of combined EPA and DHA for 75 days. Over 80% were happy with the amount their pain had improved and would continue taking Omega-3 supplements.

Plus, over 50% abandoned their prescription NSAID entirely. Most importantly, there were no significant side effects reported by the participants.

This study concluded that a dose of 1200 mg of Omega-3 per day was just as effective as Ibuprofen in reducing arthritic pain.

Ideal Dose of EPA and DHA for ADHD/Cognition

Attention-deficit/hyperactivity disorder (ADHD) is a common neurodevelopmental disorder. Most commonly, stimulant medication has been used in the treatment of the disorder.

However, over time this has shown to have numerous negative side effects as well as intolerance. Therefore, there has been a vast outcry for alternative medications.

As it is well supported that Omega-3 plays a significant role in proper brain function and development, several studies have suggested that supplementation with polyunsaturated fatty acids is effective in improving ADHD.

Moreover, in over 25 studies only mild side effects were noted from the use of Omega-3 supplementation in the treatment of neurodevelopmental and psychiatric disorders. It is suggested that 120 mg of combined EPA and DHA be taken daily by children to aid the treatment of ADHD.

Furthermore, numerous studies have found that patients with Alzheimer’s disease (AD) have significantly lower levels of DHA in the brain. Not only does this suggest the imperative role of DHA in memory, learning and cognitive processes, but as there is currently no cure for AD, identifying Omega-3 supplementation as a cost-effective way to prevent the disease is a medical priority.

Although research is ongoing and more studies are needed in order to identify the correct levels of Omega-3 to prevent AD and improve cognition, the vast research already completed is a positive step in the right direction.

Thank you kindly for the useful information. I will add this to my daily regimen.