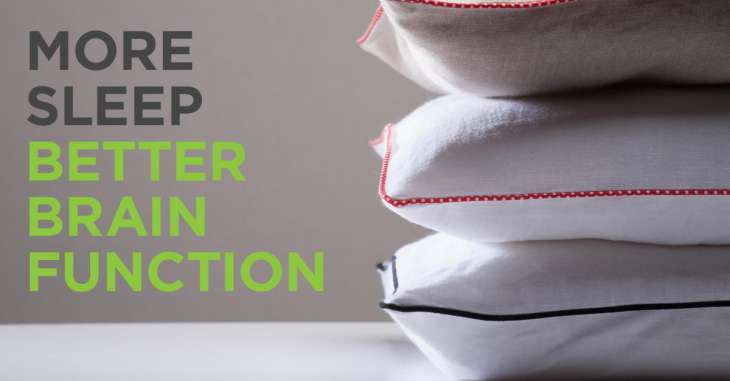 Sleep is a mysterious subject when it comes to science. Researchers have theorized for centuries about why we need it and what functions of sleep really affect the brain.

We know the obvious, it replenishes our energy, but some have argued it is even evolutionary. One theory, is millions of years ago we slept at night because it kept us out of danger from the animals and bad things that came out at night to hunt.

Therefore, we evolved to depend on it. Now, I do not necessarily believe all that, but sleep and the brain can be a mystery for those who really dig for the reasoning.

Some may think the brain rests at night, which is partly true, but also way wrong! The brain is constantly working, repairing, and making connections even while you sleep. And while it is doing all this, it is replenishing your energy to get you ready for the next day! It is astonishing, and some would say a miracle, if you start getting into the details.

So, let’s talk about the certain ways we do know that sleep affects the brain; the good if you get it and the bad if you don’t.

I love sleep. Like, reallly love it. So I could write for hours about why it’s great.

But ultimately, the main functions of sleep fall under one of the following categories:

Let’s take a closer look at each to see how sleep works its magic.

It doesn’t take any research to know that sleep affects your cognition (In a nutshell how you operate daily by paying attention and making decisions).

The most important is probably multitasking ability. If you don’t get enough sleep, you are more likely to be unable to chew gum and talk at the same time. Well, that is a funny example that is not realistic unless you were severely sleep deprived.

A more realistic example is driving. It is the most common multitasking event most of us do every day and also the biggest reason why there are so many accidents. When you start having to do 3 or 4 things at once (driving, looking, accelerating & breaking, and having a conversation) then things are more likely to go awry if you only had 6 hours sleep the night before.

Being sleep deprived also has shown to hurt your cognitive memory. Especially the short-term! Short-term memory is probably the most complained about problem we have with our brains. We seem to think the older we get the worse it gets, but honestly it is more related to more stress and less sleep!

We briefly mentioned short-term memory, but the brain also fixes and solidifies long-term memory. During sleep it either saves memories like a hard drive for later or it gets rid of them. I have heard people say before “I wish I could remember everything”. No you don’t!

Do you realize how overwhelming our minds would be if we remembered what we ate and watched on Television 217 days ago? Our brain takes care of the things we need and the things we do not need. Of course, not getting the proper sleep will not give you the proper time to store memories.

We’ve talked a lot about nootropics that improve your memory, but sleep is the ultimate nootropic. It is the alpha and omega — nothing beats sleep.

Now, you may understand why you failed that exam you took at 7 AM that you stayed up studying for till 3 AM. Your brain couldn’t retain what you were throwing at it because it didn’t have time to save it!

Having trouble coming up with ideas for your guest party? Having writer’s block? These are examples of what lack of sleep can do to your creativity.

Thinking outside the box, or divergent thinking, is exactly what improves with the proper amount of sleep. Though, performing simple steps, or convergent thinking, stays about the same as long as you can stay awake!

To put it simple, the brain can and will not come up with the next “big thing” if you don’t get enough sleep.

Yes, your brain has toxins or junk it accumulates that it has to get rid of every day. It was just discovered in recent years that sleep is needed to get rid of these toxins, the same ones that are found in Alzheimer’s.

Your brain constantly gets rid of these toxins while you are awake as well, but does a “deep cleaning” flush while you sleep. Again, the less sleep you get the less time your brain has to flush those nasty toxins.

Sleep and depression are so closely correlated that they depend on each other. Depression thrives in individuals who either do not get enough sleep or people who get too much! The bad news is that people who have depression also want to sleep more and more which is an awful downward spiral that is difficult to get out of.

Again, studies have found that people who sleep more than 8 hours or less than 6 hours are more likely to have depression. If you have ever even had a whiff of what depression is, then you know it is a terrible, unhopeful position to be in.

Your sleep habits are the ultimate first cause of depression, so taking your sleep-time seriously and giving your brain the time it needs to replenish is super important.

Your body doesn’t actually need sleep like your brain does. Have you ever heard the saying “My body could go all day, but my brain will not allow it”? This is mostly true! Your body does need rest to rebuild muscles etc., but it doesn’t HAVE to have sleep to rest.

Yet, not having sleep does affect some parts of your body, like that other important one, the heart. In fact, if you do not get enough sleep you could suffer from high blood pressure, heart rate levels get out of whack, and an increase in thyroid and stress hormones says the Radiological Society of North America.

Sleep loss also has been found to contribute to weight gain because your body produces healthier fat while you sleep that burns off the bad fat. Now, this doesn’t mean you have an excuse to be lazy and find all the ways possible to go to sleep fast so you can lose some weight. As you read earlier, too much sleep can have some negative effects as well.

It is still not entirely clear how many organs are affected by the brain and the sleep amount it gets, but we do know they are affected more than most people think because the brain controls our body. So, to be on the safe side, get enough sleep.

So, What Is Important?

If this does not encourage you to get the proper amount of sleep, then probably nothing will. Sleep is the vital key to brain function. Without it, the brain is like a stumbling drunk. It will struggle to perform normal daily activities and is an unhealthy place to get caught in.

On average, getting 7-9 hours of sleep is the right amount. It differs for everyone. Women have been known to need more (9-10) in some cases. My wife is a case! If she does not get at least 9 hours, then the next day could be a bumpy day, for both of us!

Aaron is a public educator, health freak, and founder of SnoozeEZ.com. Aaron studies, researches, and blogs about all things that are sleep related. He loves his sleep and talking about it, but don’t disturb this guy while he is doing it. You can follow him at Twitter, Facebook, and LinkedIn.