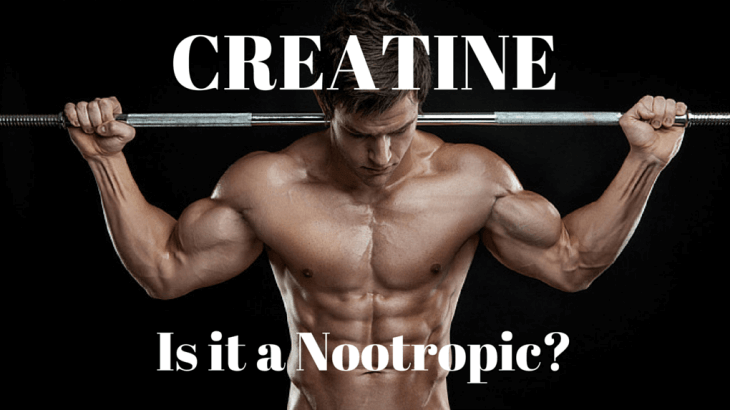 Creatine: an Effective Nootropic For Body and Mind

I don’t believe it is possible for me to enjoy a good quality of life unless I take care of my body.

I do get periods when I’m too lazy to work out, but I always end up suffering for it when I slack off.

Keeping my body in decent shape isn’t so much a vanity thing for me. I do a job that requires a great deal of brain-power, and I know that if I don’t take care of my body, it affects my mental functioning as well.

The thing that interests me most about creatine are the benefits it has for both the body and brain.

Creatine has become a popular supplement for people who are trying to develop muscle strength and increase muscle size.

It is also used by athletes who are looking for an extra initial burst of power – although the evidence so far doesn’t support its value for improving endurance overall.

A Brief Introduction to Creatine

Before we look at some of the ways creatine might benefit your life, it is probably best to provide a quick overview of what it actually is.

This is a substance that is created naturally in your body by the liver, and you can also get more of it from eating certain foods. It is mostly (about 95%) stored in skeletal muscle tissue – it can also be found in the brain and testes of men.

The creatine that is created by you liver is referred to as nitrogenous organic acid, and it is made up of glycine, L-methionine, and L-arginine.

The main function of creatine is to supply cells in the body with energy – it is mostly used by muscle cells because these have the highest energy demands.

It isn’t that creatine actually creates energy itself but that it replenishes ATP so this chemical can keep providing energy.

If it wasn’t for the presence of creatine in the muscle, it would not be possible for ATP to deal with the energy demands of the body.

It is common for vegetarians to have low creatine levels. This suggests that the body is not capable of providing an optimum level of this chemical for the demands of modern living.

Meat and fish are the main foods that contain creatine, but those of us who lead active lives would probably benefit from taking a supplement.

How Can Creatine Help You Develop a Superior Brain?

It’s not hard to imagine how taking creatine supplements could boost the brain. This organ consumes about 20 percent of our available energy, yet it only accounts for about 2 percent of our body mass.

Creatine increases energy efficiency, so it is only to be expected that it would improve mental functioning.

The brain-boosting effect of creatine that most interests me is its potential to increase my productivity levels. I get paid by the amount of work I do so this could raise my earning potential.

Creatine is able to boost productivity because it reduces mental fatigue and improves brain functioning. If you want to be able to get more done in your life, taking some creatine supplements could be the answer.

I’ve becoming increasing forgetful as I get older. It’s usually just small things. A couple of weeks ago I got worried because a client hadn’t paid me, but it turned out I’d forgotten to send him an invoice –duh!

A bit of forgetfulness is a natural part of aging, but this doesn’t mean I just have to put up with it. One of the other nice benefits of creatine is that it has been shown to improve memory.

One study conducted by University of Sydney and Macquarie University provided creatine supplementation to 45 young adult vegetarians, and it was found that 5g of this substance every day for six weeks led to an improved ability to remember telephone numbers.

It is a bit of a dent to my ego to know that my testosterone levels have been declining since I turned thirty. This is the hormone that is most associated with manliness and sexual performance, so knowing that it is declining isn’t such a swell thing.

Testosterone has an impact on mental functioning, so it is probably negatively impacting my ability to think sharply as well. One study found that people who took creatine while participating in a 10-week resistance training program had a 20 percent increase in testosterone when compared to a placebo group.

Will using creatine make me more intelligent? I’ve always struggled a bit when it comes to understanding what it means to be intelligent.

If I consider it to be processing speed, which a lot of people do, it does seem likely that using creatine would make me more intelligent.

There is some good evidence to suggest that taking this supplement means the brain can process information faster (see the University of Sydney and Macquarie University study above).

It’s a long time since I left college, but I can understand why students these days would want to use creatine when revising for exams.

This substance not only seems to improve the ability to memorize stuff, but it also increases focus. I have times when I need to work on large projects for hours at a time, so creatine is probably going to help with this as well.

Are There Any Reasons Not to Take Creatine?

So far, I’ve probably sounded like some type of crazy creatine fanboy, so it is probably important to add a little balance to the proceedings.

Are there any dangers in taking creatine? This substance is found naturally in the body, so there is no real concern about adding something to it that doesn’t belong.

There are claims that it can impact hydration levels in the body, but the evidence for this isn’t clear. It would probably be wise for anyone who has renal problems to avoid taking this type of supplement until they have first discussed the situation with their doctor.

There is some anecdotal evidence of people using this supplement experience cramps, but this possible effect is not supported by evidence from research. The general conclusion seems to be that creatine is safe to use but like all things, it is safer to use it in moderation.

Important note: avoid drinking after taking creatine. Alcohol and creatine do not mix. Mario Tomic, fitness and nutrition coach of ShockingFit.com, has this to say about creatine and alcohol:

Creatine and alcohol have opposite effects: while creatine attracts water in muscles, alcohol is one of the strongest diuretics.

When consuming large quantity of alcohol your body will need a lot of water to flush out the acetate which is a by product of alcohol metabolism.

This can potentially create problems, as creatine also demands water to function.

So if you don’t have sufficient water intake during the day, it might cause dehydration if too much acetate needs to be flushed.

In other words, lay off the booze! If you absolutely must have a drink, keep it to a small glass of wine or weak cocktail, and make sure to hydrate as much as possible.

Where To Buy Creatine

You can buy creatine in local pharmacies or online. Here are a few of my favorite options:

Some Final Thoughts on Creatine

Creatine can improve brain functioning as well as benefiting the rest of the body.

It would probably be a mistake to treat it as some type of wonder drug.

I’ll continue to exercise and take other steps to achieve the highest level of mental functioning possible.

It does seem that creatine supplements are a great addition to my efforts, and it might be something that could work for you too.

Some of the best nootropics for muscles