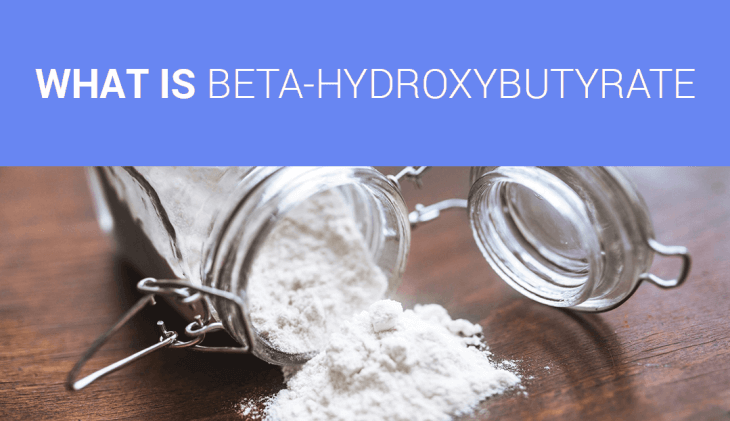 Maybe you’ve heard the nickname “jet fuel” and thought it was some alcohol-infused energy drink you could order at your neighborhood pub.

Well, it’s not an alcoholic beverage, but you wouldn’t be totally wrong in your thinking.

“Jet fuel” is a popular colloquialism for beta hydroxybutyrate or BHB, a ketone body that is produced during a state of “fasting.”

Fasting, of course, is when you go without food. We already know that, but what don’t we know?

Today, we’ll take a look at what BHB is all about, how it works and why the ketogenic diet is becoming a phenomenon among certain health conscious people.

Beta Hydroxybutyrate: What Is It?

Beta hydroxybutyrate is produced when the body is not receiving a sufficient amount of food (glucose). The body yields BHB in an effort to provide an alternative source of energy.

The formation of ketone bodies and the way in which they are used is a protective mechanism against cellular starvation.

Low-carb diets that are rich in fatty acids can do one of two things: 1) Cause the body to produce ketone bodies like beta hydroxybutyrate or 2) Give people the opportunity to consume such ketone bodies exogenously (from external sources).

It is now easier than ever to utilize ketone bodies for maximum brain performance.

BHB (aka Beta Hydroxybutyric acid or beta hydroxybutyrate) has a range of incredible health benefits, not least of which is its source of energy in lieu of glucose. After 24-72 hours without food, the body no longer relies on glucose as a fuel support system.

Instead, BHB kicks into high gear and all of our energy is derived from it. What’s most impressive is that it is now possible to fast for as long as 382 days with medical supervision when ketone production is underway.

One study suggests that ventricle application of BHB before exercise can improve cognition and relieve symptoms of anxiety and depression.

Few trials have been conducted to determine BHB’s value as a supplement, but a couple brave souls have done self-experimentation and were shocked by the results.

In a blog post entitled “My Experience with Exogenous Ketones,” Dr. Peter Attia, MD found that less oxygen needed to be consumed by his test subject’s brain during ketosis.

He writes, “Animal models (e.g., using rat hearts) and unpublished case reports in elite athletes suggest supplemented BHB produces more ATP per unit carbon and per unit oxygen consumed than glycogen and FFA. This appears to have been the case in my anecdotal exercise.

“The energy necessary to perform the mechanical work did not appear to change much between tests, though the amount of oxygen utilization and fat oxidation did go down measurably.

“The latter finding is not surprising since the body was not sitting on an abundant and available source of BHB—there was less need to make BHB ‘the old fashioned way.’”

Additional evidence points to ketosis as a valuable tool for improving memory in those suffering from mild cognitive impairment.

In this study, the findings supported the idea that a low-carb diet could be especially beneficial to those of an age where one is at an increased risk of developing Alzheimer’s disease.

Doctors and researchers at the Mayo Clinic believe that a ketogenic diet could also serve as an outpatient treatment for kids afflicted with epilepsy.

Dr. Jeffrey Buchhalter of the Pediatric Epilepsy Program in the Department of Neurology at Mayo Clinic writes, “Our study shows that it’s possible to begin the diet safely as an outpatient and maintain it without restricting fluids as done in other centers.

“For parents with children who have epilepsy, it means potentially fewer days of lost work while the diet is initiated and more comfort for their child. However, we do recommend that these findings need to be confirmed in a prospective study.”

Supplementing BHB has also been embraced by athletes and bodybuilders who can use ketone bodies as a fuel source to minimize glycogen depletion.

Possible Risks of a Ketogenic Diet

Of course, it’s not all wine and roses when it comes to ketosis. As with any diet, fasting for ketone bodies can have its risks or drawbacks.

One study on lab rats found that a high-fat, low-carb diet may help children with epilepsy, but visual-spatial learning and memory impairment were also observed.

This lead to some concern about whether or not long-term ketosis would stunt brain development in small children.

Also, although BHB is generally well-tolerated due to the fact that it naturally occurs within the human body, supplementation can be tricky due to certain BHB products containing sodium and other additives.

For this reason, it is imperative that users research any products they might potentially take for this purpose.

A standard dose of BHB is between 10 and 12 grams per serving. Dosage is an important factor during ketosis and users should always dose with caution.

Overdose and death are concerns when taking beta hydroxybutyrate in high doses. As such, it is best to stick to a moderate dose. Additionally, users should cycle their doses to avoid any unnecessary side effects.

Toxicity levels are quite high in animals, leading to the belief that it can also be high in humans. Those using beta hydroxybutyrate should also consider incorporating blood glucose and ketone testing into their ketogenic regimen.

How & Why to Buy Beta Hydroxybutyrate

Finding a plain BHB product at your neighborhood health food store is not an easy thing to do. Many products contain other ingredients or even fillers. Luckily, there are many reputable vendors selling beta hydroxybutyrate online.

Personally, I recommend taking Perfect Keto for their exogenous ketone body needs. Their ketones are top quality and they are a trusted company.

But before you consider buying the unflavored variety, consider what Dr. Peter Attia has to say about it:

“The ketone esters are, hands-down, the worst tasting compounds I have ever put in my body. The world’s worst scotch tastes like spring water compared to these things…It tasted as I imagine jet fuel would taste. I thought I was going to go blind. I didn’t stop gagging for 10 minutes…”

However, the way ketone esters taste has been well-documented by several sources and it is worth noting that one should expect a bit of unpleasantness on their palate if they’re getting the real deal.

As Perfect Keto put it on their blog, “If we drink ‘ketones’ that taste ‘great’ it is because,

“There’s little to no actual ketone bodies in the product and 2) There’s an enormous filler/garbage to ketone ratio.”

Something to Consider Before Taking Beta Hydroxybutyrate

It is important that those who have never been on a ketogenic diet understand that your body will have to grow acclimated to these new conditions.

If you feel weak when you first start your regimen, it is not a cause for alarm.

When removing carbohydrates from your diet, you can expect to feel fatigue and flu-like symptoms for at least a couple of days.

Making such a drastic change throws your body into a state of confusion, but this confusion should pass as your body adapts to its new energy source.

Also, if you’re looking to use BHB for bodybuilding or other athletic pursuits, consider that there is limited scientific evidence to support its efficacy in this area.

In fact, several fitness and nutrition specialists believe it to be way over-marketed and some have spoken out against it.

A writer for T-Nation.com urged their readers to avoid what he called the “ketogenic rip-off,” saying, “The problem with ketone supplementation (EXOgenous) is that it’s not even close to the same thing as being in ketosis (ENDOgenous ketone production). And just like the butter-blended-into-coffee trend, it’s a farce.

“Ketones may be depressing dieters’ hunger and giving them a hit of energy and cognitive enhancement, but it’s INHIBITING their ability to burn fat, providing zero nourishment, and doing nothing for their metabolic health. There’s an assortment of evidence suggesting that it’s probably making things worse.”

A user on Reddit posed the question, “Would I be wasting money by buying exogenous ketones if I already take MCT Oil?” And the responses were quite mixed.

One response read, “Keto salts are pretty useless” while another one said, “Exogenous ketones can be used in the ATP cycle directly after absorption making them advantageous in situations where you need energy now.”

However, this same person said, “So far, I’ve heard of people using them in pre-workouts before lifting with some success (no measurements though, purely anecdotal).”

The problem is simple: The precise physical benefits of BHB supplementation (or lack thereof) are still unknown.

While some medical experts have espoused ketone esters for physical performance, evidence corroborating their claims remains scarce at best.

In short, users taking it for exercise goals or weight lifting purposes may be taking a gamble by using exogenous ketones.

And while the ketogenic diet is a controversial one, it has worked for lots of people as many online users have confirmed.