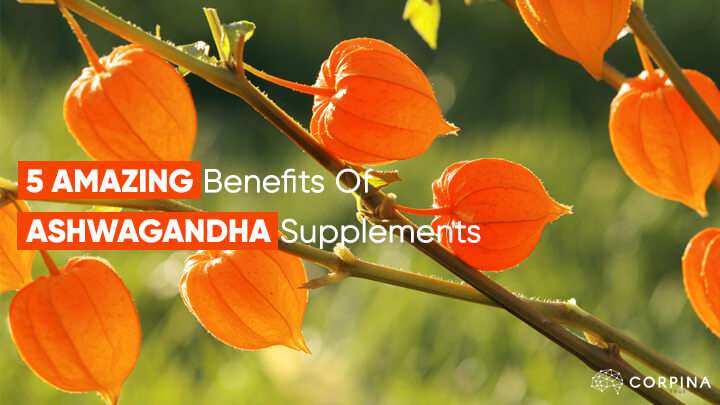 Ashwagandha is a popular herb used in Ayurvedic medicine. It has a whole host of different uses, and as I started investigating, I found that the number of Ashwagandha benefits was so great, I had to start writing about them.

I won’t discuss all of them, though. Today, I just want to focus on some of the most amazing Ashwagandha benefits and also its side effects.

These are the ones that many people aren’t aware of or those that people would not even expect from the peculiar plant.

Could Ashwagandha contain compounds responsible for promoting healthier hair? It’s true that it won’t magically grow hair, but there are several ways in which researchers believe that Ashwagandha can help create healthy conditions for hair to grow.

One is the plant’s ability to regulate stress. Ashwagandha contains Tyrosine, an amino acid that researchers believe can help reduce stress levels. In combination with its other properties, Ashwagandha combats a primary stress hormone, Cortisol, at the chemical level.

In certain forms, it has additional properties. One is the Ashwagandha powder benefits for men where the level of Melanin is increased.

Studies in which elderly men took regular doses of Ashwagandha showed an increase in their Melanin levels, allowing them to maintain their hair color.

The effects of Melanin are not gender specific, suggesting that the healthy hair color exhibited by men in the study could be equally enjoyed by women.

Ashwagandha powder is also an ingredient in some shampoos. In this form, it can provide even greater support to the hair.

Ashwagandha shampoo counteracts dandruff and increases blood flow/circulation to the scalp. This creates an environment in which the hair can grow faster and healthier.

The idea of increasing one’s height via supplementation may seem far-fetched at first glance. There are several schools of thought on the matter, and some relate directly to the use of Ashwagandha.

Skeptics dispute the claims of sparking height growth with medicine. According to detractors, the only way to induce height growth through drugs is using Human Growth Hormone (HGH).

Even then, they say, your genetic potential will limit how much height you will be able to gain.

They concede, though, that there are cases where a dietary deficiency may limit someone from reaching their height potential. In these situations, Ayurveda practitioners claim to be able correct that.

They stress, however, that the deficiency simply causes individuals to miss their height potential. In their view, no amount of Ashwagandha will push an individual past their genetic maximums.

In the context of some Ayurveda, though, Ashwagandha may have benefits for additional height gains. These benefits may increase when used in conjunction with proper dieting and complementary exercises.

The way these proponents of Ashwagandha see it, the process works like this:

The minerals contained in the Ashwagandha root promote skeletal growth and greater bone density. In turn, your height may potentially increase.

They purport that a 45-day regimen consisting of Ashwagandha, combined with a series of yoga and stretching exercises, could be responsible for modest gains in height for men and women.

Individuals experience the greatest effect when using the root in powdered form. You can grind down raw Ashwagandha roots to create the powder yourself.

You can also obtain pre-packaged Ashwagandha powder. There are several varieties that are highly recommended by users. Of these, Terrasoul, Banyan Botanicals, and Organic Veda are standouts.

The most common thyroid conditions, hypothyroidism, and hyperthyroidism, are normally the result of an imbalance of hormone levels. Ashwagandha has the potential to correct these in several ways.

The first is through the reduction of stress. Increased Cortisol levels can induce problems with thyroid function. Ashwagandha counteracts these effects, allowing for the Thyroid to function more naturally.

Some evidence suggests that Ashwagandha can directly stimulate thyroid hormone production. Theses studies, carried out on mice, showed an increase in thyroxine and triiodothyronine on mice with reduced levels.

Researchers do not yet know the mechanism for this effect. It does, however, lend credence to claims that it may counteract hypothyroidism.

There are several methods for achieving the boost in thyroid hormones. The most notable are Ashwagandha caplets and capsules, taken in twice daily 500MG doses. Ashwagandha liquids or powders mixed into drinks may also provide some benefits.

Though mostly safe, there are several side effects to consider. It can alter blood sugar and blood pressure levels. It can also interfere with other medications. Benzodiazepines, in particular, are augmented by the effects of Ashwagandha.

It’s not a wonder cure, but in conjunction with stress reduction tactics, Ashwagandha could show noticeable benefit for those suffering with some Thyroid issues.

There are several ways that Ashwagandha can, directly and indirectly, support weight loss goals.

First, there is some potential for Ashwagandha to eliminate fat cells, as evidenced by some research trials. Whether or not the dosage required to achieve this effect would be practical is up for some debate.

Where Ashwagandha researchers have seen a more practical benefit to weight loss is in allowing users to train harder.

They were able to produce increased force with their muscles, and bench press greater weight. Cyclists showed enhanced VO2 (maximum oxygen) levels. They were also able to burn more body fat during the period in which they were supplementing with Ashwagandha.

Ashwagandha gives users a greater level of energy. This provides them with more motivation to work out and greater vigor during their sessions.

Use of Ashwagandha helps users control stress. This also helps limit weight gain that is the result of heightened Cortisol levels. It also helps cut down on stress-induced overeating.

The decrease in blood sugar levels caused by Ashwagandha also helps. It prevents the high concentration of insulin that promotes fat storage in the body.

Users of Ashwagandha, therefore, experience reduced likelihood for obesity and are in an advantageous position for adding lean muscle to their body mass.

Ashwagandha supplementation of 400-2,000mg a day is suitable for reaching these goals.

Most forms of Ashwagandha are effective. It is up to individual users to decide if they prefer powdered, desiccated, liquid, or capsulized delivery methods.

Again, the ability to reduce stress gives Ashwagandha benefits for female health. In this case, the reduce stressed levels have a marked effect on allowing women to conceive in a normal manner. They counteract the toll of the fast-paced, 21st-century Western lifestyle.

“Of the great tonics, Ashwagandha because it is such a wonderful herb for women with chronic fatigue or ‘burnout.’ That’s a lot of us today! Energetically, Ashwagandha is the great rebalancer, reducing fatigue during the day while enhancing sleep at night.”

In addition to reducing stress, Ashwagandha helps regulate thyroid hormones, which directly affect a woman’s ability to get pregnant.

Ashwagandha helps protect the optimal environment for conceiving a child by supporting the immune system. Its antioxidant effects can help promote egg health.

Again, these factors combine to create a situation that is much more welcoming to pregnancy and increase a woman’s level of health and fitness so that she is better able to carry a child.

Women can enjoy the benefits of Ashwagandha supplementation by way of two 500mg tablets taken daily. They can also use Ashwagandha tinctures, or the dried roots if they prefer.

The range of Ashwagandha benefits is vast, for both men and women. Though researchers widely tout the plant’s ability to reduce anxiety, many overlook the additional benefits controlling stress and anxiety plays on other aspects of health.

There are also little known and ancillary benefits that supplementing with Ashwagandha provides. I’m hoping this list brought a few of those to inspire you to do more research on the properties of Ashwagandha.

What do you think about the benefits on the list? Have you tried Ashwagandha and experienced any of the benefits for yourself? Make sure to voice your opinion in the comments.