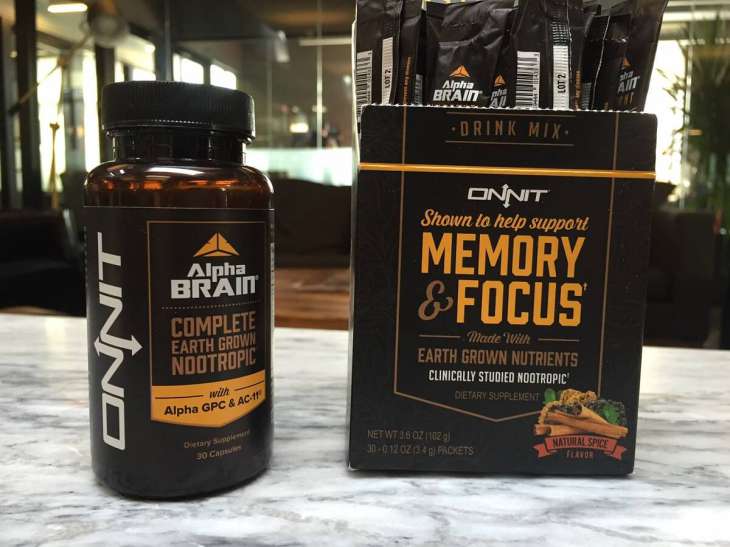 Few cognitive enhancement stacks are anywhere near as popular as Alpha Brain.

Onnit Labs, the company behind Alpha Brain, claims that their supplement is:

Reviews from around the Internet, as well as my personal experiences, largely back this claim up. Alpha Brain is undeniably a powerful supplement, and most users give it a resounding thumbs up.

However, great reviews aren’t everything when it comes to a nootropic stack. It’s equally important that any substance you’re putting into your body is good for you.

Before using Alpha Brain, I wanted to know that it was safe for consumption. I don’t take any chances when it comes to my health. I wasn’t about to trust Onnit’s claims outright.

Below I answer the question of “is Alpha Brain safe?” I pay particular attention to the long-term safety of daily usage.

About Nootropics and Safety

A brief understanding of nootropics is essential for a clearer picture of the safety of Alpha Brain.

Nootropics, according to The Art of Manliness, are natural supplements designed to boost your brain power. They take care to note that they’re not magic pills. They don’t immediately make you smarter.

Instead, nootropics enhance the mental skills you already have in place. They boost your current cognitive functions, so they’re firing on all cylinders.

Nootropics have been around since at least the early 1970s. Researchers have studied them extensively during this time.

Though modern-day nootropics are safer than ever before, it’s still essential to be vigilant when selecting yours.

Not all brands care about safety. There are plenty of snake oil salesmen out there trying to make an easy buck.

Onnit takes the safety of all their supplements, including Alpha Brain, very seriously.

“It seems to fire up your brain at a higher RPM level…I feel like it helps me form sentences better.”

Dozens of other big names endorse Alpha Brain’s benefits. Chief among these are top-level Olympic and professional athletes.

Despite the big names behind the product, Alpha Brain is pretty similar to any other nootropic stack on the market. It’s created with a proprietary blend of natural ingredients, all of which have some positive effect on brain function.

Find out more about Alpha Brain at Onnit.com/AlphaBrain.

Alpha Brain Ingredients – Are They Safe?

One of the best ways to determine both the effectiveness and safety of a nootropic supplement is by taking a look at the label.

Alpha Brain contains 11 ingredients total. Though each of these ingredients is clearly listed on the label, Onnit doesn’t disclose how much of each is used in the blend.

The lack of amounts used isn’t a huge deal, but it’s worth noting. I always prefer selecting a supplement that clearly lists exactly how much of each ingredient is used.

The reason for this is that some manufacturers sneak such small amounts of ingredients into their capsules that their effects simply aren’t noticeable.

Regardless, the 11 ingredients used in Alpha Brain are:

As I mentioned above, each ingredient has a purpose. All of these ingredients together give Alpha Brain its powerful cognitive benefits, according to The Journal of the International Society of Sports Nutrition.

Two ingredients that are particularly powerful are Alpha GPC and Huperzine A.

Not only does Alpha GPC boost your mental power, but it boosts your physical acuity as well. It’s regarded as one of the best, legal supplements to improve overall sports performance.

Huperzine A, on the other hand, is extremely beneficial for memory. Not only does it improve memory, but it also increases learning retention.

Alpha Brain has been extensively tested to meet the highest safety standards.

Though the entire supplement hasn’t been tested by the FDA, the organization does consider every individual ingredient as safe.

Onnit Labs has also done its own extensive safety testing. Unlike most other nootropics, Alpha Brain has been clinically studied.

Clinical studies of Alpha Brain have established its safety. Though mild side effects are experienced by a small number of people, they’re not at all common.

Also of mention is Alpha Brain’s BSCG Certified Drug Free certification. The third-party organization extensively studied the supplement to ensure its free of drugs and other substances with the potential to cause harm.

The BSCG Certified Drug Free certification also ensures that Alpha Brand doesn’t contain any ingredients that will create a positive in a drug test.

A small number of users reported they experienced headaches and jaw pain. All of these symptoms were mild and went away quickly.

Strangely, another reported side effect was vivid nightmares. This side effect is even less rare but more severe than the headaches and jaw pain.

It’s always a good idea to talk to your doctor about whether a nootropic is right for you, whether that’s Alpha Brain or any other supplement.

So, what’s the verdict? Is Alpha Brain Safe?

The short answer to that question is, yes, Alpha Brain is very safe for long-term, daily usage thanks to its natural blend of FDA-approved ingredients.

Here’s what I recommend you do if you’re interested in buying Alpha Brain:

Do these three things, and you’ll ensure your body reacts well to Alpha Brain. You’ll also be able to track whether it’s effective for you.

Have you used Alpha Brain before? Did you experience any side effects, from either short-term or long-term use?

Let me know in the comments below.