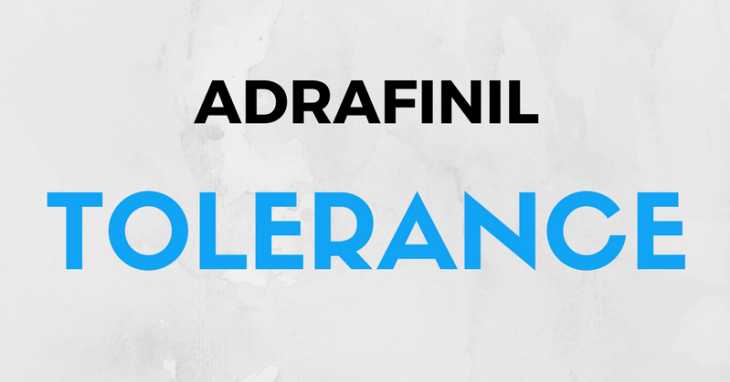 Have you ever had one of those days where you just can’t seem to get things to click?

I know I have. Every now and again, my brain just doesn’t want to turn on. I feel unmotivated, unproductive, and plain old lazy.

That’s where Adrafinil enters the picture. Though it’s not a long-term solution by any means, it is an effective way to kickstart your brain into high gear when a deadline or other important event is looming in the near future.

A powerful nootropic stimulant, Adrafinil gives you a significant boost of energy that increases wakefulness and reduces fatigue. To me, the feeling is like a fog is lifted from my mind. I suddenly have the drive to finish whatever project is bogging me down.

But Adrafinil isn’t all fun and games. You should at least be wary of its side effects. There’s also the potential to build up a tolerance – or is there?

Curious to know more about the long-term effects of the nootropic, I decided to research Adrafinil tolerance in depth. Here’s what I found out.

According to The Art of Manliness, nootropics are a recently popular class of supplements designed to boost brain power and energy.

Though they’ve been around since at least the early 1970s, it’s only in the past decade or so that they’ve captured the mainstream’s attention.

The effects of most nootropics, including Adrafinil, are similar to those of Adderall (without the risk of dependency). Take a nootropic, and you’ll experience a sudden feeling of clarity.

Nootropics make you feel like you can accomplish anything – and, in a lot of ways, you can. The supplements improve memory, concentration, processing speed, and more, making it vastly easier to accomplish difficult and tedious tasks.

A side benefit of many nootropics is increased energy. The boost of energy nootropics like Adrafinil provide helps make completing tasks even easier.

Adrafinil is one of the most popular stimulant nootropics for promoting wakefulness.

It’s very similar to the nootropic Modafinil. In fact, Adrafinil breaks down into Modafinil in your liver after ingestion.

Why not just buy Modafinil instead? Well, Modafinil is no longer legal in the United States without a prescription. It was deemed too potent to use without doctor’s orders.

Fortunately, Adrafinil is still available to purchase from stores. Though it’s no longer available on Amazon, it’s easily found at most online vitamin stores.

It takes about an hour for Adrafinil to kick in. This is about how long it takes for the liver to turn the compound into Modafinil.

After about an hour, the effects are immediately noticeable. Like I mentioned above, Adrafinil feels like a fog lifting from your brain. Clarity, energy, and focus kick in big time.

What I like most about Adrafinil is how long its effects last. You can expect to reap the rewards of the supplement for at least six to eight hours after ingesting it.

Take care to note that Adrafinil does show up on many drug tests, including those done by the World Anti-Doping Agency for international athletes.

Common Side Effects of Adrafinil

According to the Adrafinil page on Examine.com, the supplement has very few side effects.

Most people don’t have to fear anything worse than minor nausea, anxiety, irritability, and dry mouth. And even these mild side effects aren’t common.

Adrafinil tends to only negatively affect those allergic or ultra-sensitive to it. That’s why it’s important to start with a small dosage to test out the effects. It’s even a good idea to talk to your doctor before trying Adrafinil.

In very rare cases, more severe side effects are experienced. Chief among these are poor sleep and insomnia.

I haven’t used Adrafinil often enough to develop a tolerance to it.

However, I frequently hear whispers of such a phenomenon from friends, colleagues, and especially around the Internet.

“Stopped taking Adrafinil because it seemed like there was a tolerance.”

The user mentions that they stopped using it because they didn’t feel the effects anymore.

They then claim to have tried more Adrafinil from the same batch a few months later and still didn’t experience any results.

It’s important to only buy it in relatively small quantities, as a larger batch of Adrafinil will lose its potency after a few months, especially if it’s exposed to oxygen or moisture.

This is the same reason why it’s essential to purchase all nootropics from a reliable supplier.

You have little chance of building an Adrafinil tolerance, according to most resources.

However, there’s still relatively little scientific research regarding the subject. Even the more well-known Modafinil has little real evidence of building up a tolerance.

The best way to prevent building up a tolerance is to take Adrafinil moderately. Don’t take it every day. Space out your doses, so you only take it when you need it.

In addition to preventing tolerance from building, limiting your intake of Adrafinil helps protect your liver.

Taking too much of the supplement has the potential to damage your liver since the liver must work hard to convert it to Modafinil.

There are plenty of Adrafinil / Modafinil alternatives you can work into your nootropic routine to prevent liver damage or building a tolerance.

If you take Adrafinil on a regular basis and don’t feel like it’s producing the same effects, here’s what I want you to do:

Have you ever experienced a buildup of Adrafinil tolerance? Are you sure it just wasn’t a bad batch?