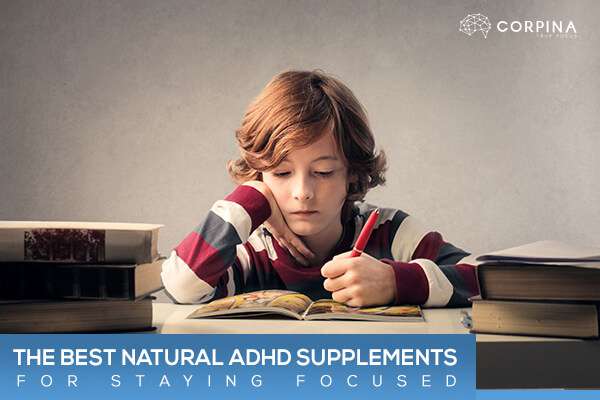 As a Special Education Advocate, I know that ADHD is a disorder. Many parents are at their wit’s end with their children’s lack of focus in school and difficulty in completing homework. A student with ADHD can derail the most experienced teacher’s class, causing daily disruption.

ADHD supplements may work wonders for students that just can’t pay attentional or sit still long enough to complete their lessons. They work just as well for adults. See this video by Dr. John Axe to learn more about supplements for ADHD.

Here is a list of 7 ADHD nutritional supplements to get you started.

Dr. Sandy Newmark acknowledges several studies that show that children with ADHD may have lower levels of zinc in their systems. Zinc supplements have been proven successful in reducing hyperactivity and impulsivity.

The zinc that we take in through our diets is partly responsible for regulating the activity of chemicals in the brain. Along with fatty acids and melatonin, zinc is a chemical that our bodies produce to regulate behavior in children and adults.

Unfortunately, zinc is not a cure-all supplement for kids with ADHD, as zinc supplements won’t help with inattentiveness.

While zinc helps the hyperactivity issue related to ADHD, high levels of zinc can be dangerous for children. Excess amounts of zinc can cause fever, coughing, stomach pain, fatigue, or a host of other illnesses and ailments. According to WebMD, excess zinc is also responsible for problems with prostate cancer and blood iron. Too much zinc in anyone’s diet can even be fatal.

Dr. Newmark recommends a typical dosage of 20 mg. of zinc daily, as a dietary aid for children that need it. She cautions that physicians should check zinc levels before prescribing it as a supplement.

DHA and EPA are found in many fish oil supplements. In an article called, “6 Essential (and Often-Overlooked) Supplements for ADHD,” Additude magazine suggests that you should look for a product that has twice the amount of EPA to DHA. The article adds that liquid or capsule forms work best.

DHA has also been proven to aid in cardiac health, depression, arthritis, and many other illnesses. It is also useful as an anti-inflammatory aid.

Compared to people without ADHD, children and adults with ADHD typically have lower levels of DHA, possibly because they don’t get enough of the essential omega-3 fatty acids through their diets.
Omega-3 supplements often improve the function of brain cells, which improves thinking and behavior in people diagnosed with ADHD.

3. Iron Supplements-People with ADHD Have Abnormally Low Levels of Iron

The National Center for Biotechnology Information (NCBI) performed a study in 2012 that showed that people that have ADHD have abnormally low levels of iron. Scientists believe that the part of the brain that regulates consciousness and alertness is affected negatively by low levels of iron in children and adults.

A study in 2008 researched children who were tested as not being anemic, but had low ferritin levels. Ferritin is a protein that is required to store iron in the blood. During this study, children received an iron supplement of 80 mg. every day for three months.

Physicians should test iron levels before prescribing iron supplements for adults and children due to serious and harmful effects of iron overload. The Iron Disorders Institute states that too much iron increases the risk for:

4. Ginkgo Biloba and Ginseng Provide an Herbal Remedy for ADHD

The Canadian College of Naturopathic Medicine confirms that herbal medicines have been used throughout the ages to reduce stress and nervousness in our minds and bodies and that they are equally as effective in today’s world.

Herbs such as Ginkgo biloba and ginseng are two herbs that have a strong reputation for reducing irritability, tension, and anxiousness in adults and children.

In addition to reducing symptoms of depression and anxiety, Gingko Biloba helps improve memory, focus, and cognitive function in people with ADHD, although many researchers agree that additional studies are needed to solidify results.

Mayo Clinic lists ginseng as a herb that improves concentration and memory while reducing negative symptoms of ADHD like irritability and nervousness. Red ginseng has been proven to reduce hyperactive behavior in children and adults. Children were better able to focus at school and adults were better able to perform at work.

Another benefit of Ginkgo biloba and ginseng is that they are ADHD herbal supplements that are easy to take. They can be taken as a pill or drank as a tea.

Mayo Clinic confirms that most people tolerate Ginkgo biloba and ginseng well, but both have been known to thin the blood. They should be used cautiously in people with clotting disorders, people taking blood thinners, and prior to surgical or dental procedures, due to reports of bleeding.

Some experts believe that children with ADHD may have a mild magnesium deficiency and that magnesium is a good natural supplement for ADHD in adults and children to improve ADHD symptoms.

As I noted regarding the other minerals, excess magnesium can be too much of a good thing. Physicians should test levels of magnesium before prescribing a supplement. Magnesium can interfere with certain medications, including antibiotics and blood pressure medications.

Jessica Johansson, of Orebro University in Sweden and her team note that children with ADHD tend to have lower levels of protein than their peers without ADHD, as reported by PsychCentral.com. Jessica attributes insufficient levels of protein with a decreased ability of the brain to convert the protein into serotonin, which contributes to impulsivity.

Certain foods and some nutrients can increase the levels of tryptophan, which is an amino acid that helps convert protein into useable fuel for the brain when it becomes serotonin. Some foods that are rich in protein are chicken, beef, soy, spinach, fish, and eggs.

Protein is key to helping children and adults keep their focus. Parents that have picky eaters may find that a good ADHD supplement for children is a tasty protein shake. Picky adults like protein shakes too, but just be careful and avoid too much sugar, preservatives, and artificial flavors.

ADHD supplements that work include the herbal varieties of melatonin and valerian. These are natural remedies that help children and adults relax and go to sleep. These herbal products also help calm hyperactivity and reduce anxiety.

It’s important for you to know that melatonin and valerian only treat half the problem of ADHD. Neither herb improves focus, concentration or cognitive ability.

Stimulant drugs, which are often prescribed to treat ADHD can cause a “rebound effect,” which means the person becomes overly hyperactive as soon as the drug wears off. Melatonin and valerian have less potential for the “rebound effect.”

Potential problems with melatonin and valerian are that they can interact negatively with other medications, especially sedatives.

Adults and children may like a product by Onnit, called Melatonin 5 with Lemon Balm. Onnit also offers Alpha BRAIN, for adults, which is a supplement made with earth-grown nutrients that was clinically proven to improve memory, focus, and processing speed.

There are a lot of theories about what causes ADHD, although the true causes are still not known. Some researchers suggest that ADHD has a genetic origin. Regardless of the cause of ADHD, symptoms of the disorder can make it extremely difficult for children and adults to function in their daily lives. Fortunately, there are many options for effective treatments.

Did you enjoy this list of ADHD Supplements? In my work with parents and children with mental health issues, this list is a great overview of helpful supplements that I can suggest they try. Share this article with family and friends and share your thoughts with us by leaving a comment.

I am wondering if you could comment on the best natural supplements for me. I am 64 years old and was recently diagnosed with ADHD. I am a psychotherapist and have suspected that I might have ADHD for several years. I work at a college and am currently on sabbatical doing a research project. Needless to say, I am having difficulty staying focused. I was prescribed a very low dose of Dexedrine, but I am reluctant to take it as I have sleep issues and weigh 109lb. Would you be able to reccommend a supplement for me?

Thanks so much,
Bonnie