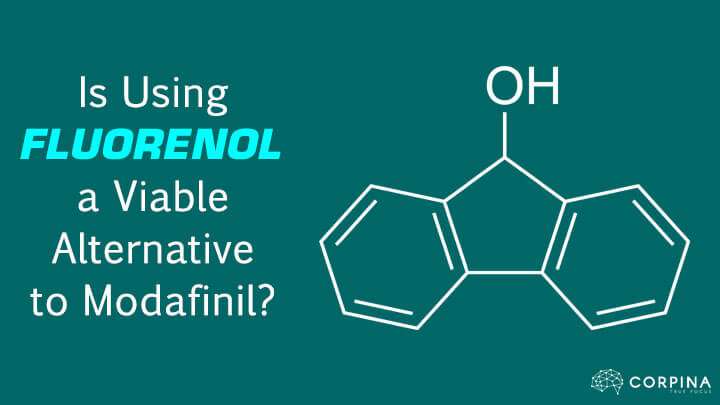 This is an anecdotal report on a my experience with Fluorenol – an alternative eugeroic substance over the course of a fairly typical work week.

Buying source, dosage, method of administration, usage experience, and side effects are covered as part of this review.

Back in July, it was a joy for me to cover our story on the 3 currently best alternative substances to Modafinil.

It was great to know that there is more than one eugeroic available to the biohacking community, and that there is ongoing research to develop even more of them!

One of the substances we covered was 9-hydroxyfluorene, better known by the much more pronounceable name fluorenol, is actually on the nootropics market right now.

Naturally, I was extremely curious about the availability of a new modafinil-like substance, so I decided to give it a try. After acquiring a small jar of fluorenol from NOOTRO (under the brand name “Hydrafinil”), I proceeded to use it over the course of a week on an “as-needed” basis.

For some background information related to my experience with Fluorenol, I am a full-time software engineer working in a fast-paced, cerebrally-demanding environment.

Depending on what other events are going on in my life, sleep may be harder to get enough of on some days, though usually I’d say I get plenty.

However, my sense of alertness will dwindle at times, especially in the late afternoon between 2-4 when my body clock tells me it’s time for a well-deserved siesta.

Thus, I expected initially that the later part of my 9-5 work day would be the best time to try out Fluorenol’s wakefulness-promoting properties.

On Monday, a lot was getting thrown at our team at work. Several bug reports were coming in from customers, and about half the team has been on vacation.

Afternoon meetings meant there was little time to relax, and it could be easy to burn out near the end of day. What a perfect opportunity to give Fluorenol its first trial!

I had already opened up the glass jar I ordered from Ceretropic. Fluorenol is much different looking than most other ingestible nootropics I’ve seen.

Rather than being a powder, it resembles a pile of tiny shreds of paper – clearly defined pieces of a bright white chemical.

I prepared approximately 20 milligrams of Fluorenol, deposited into a size “00” gelatin capsule as I do with most substances – so I can’t report on the taste at this point.  I put it down the hatch at around 12:30PM, after a boring meeting and still needing to be productive the rest of the day.

It took about 30 minutes before I perceived any changes to my mindset after ingestion.  I wasn’t anxious at all because fluorenol is known to have a short acting duration – which I treat as being about 4 hours based on other anecdotes.

What I found was that my wakefulness did gradually increase, as well as my motivation – doing things felt more effortless than normal.  Doing a few tedious things such as writing up testing procedures felt slightly more fun now.

For those of you who have tried Modafinil before, I was given an increased sense of wakefulness but it was lacking the bodily jitters that caffeine imposes.

In fact, the fluorenol felt smoother to me in some ways than modafinil, but rougher in other ways. For example, I felt less “forced” to be awake and alert, but I was perhaps a bit more impatient with my peers and I felt more of a need to be FAST – to finish tasks quickly and decisively.

Like with Modafinil, my head felt slightly hot to the touch, but there were no other side effects to mention.

I ended up leaving a few minutes early for the day, and by that time, the effects were starting to wear off. I wasn’t disappointed though, since I like to be able to control my duration of action somewhat granularly.

There was perhaps a slight crash of energy while driving home, but that is fairly normal for a person.

The next time I tried taking Fluorenol was two days later, after another enjoyable but busy day. I was pretty tired by the time I got home, but I didn’t want to give in to the urge to nap or go to sleep early, risking the regularity of my sleep schedule.

Thankfully, this was another great chance to take advantage of fluorenol and its relatively short half-life, meaning I could stay awake for a few more hours and still be able to fall asleep later.

After dosing the same 20 milligrams, I felt the same wakefulness and slight energy boost, except this time I felt even more of a boost than before. This time, I was also much less impatient with my peers as I was before. This could be attributed to setting, as I was at home now versus at work and trying to meet deadlines.

I didn’t need to pay a whole lot of attention to the fact that I was on a drug, either. I felt no side effects. Not even the ever-so-slight feverish feeling shared with modafinil before.

Later that night, I fell asleep satisfied that my little experiment with fluorenol was working out, and was able to metabolize the eugeroic within the perfect range of time.

After my first two curious trials with Fluorenol, I had reached a point where I was confident in saying that I liked it.  And I still do today!

Fluorenol has proven itself to reliably wake me up, and only for a short period of time, which has its uses more often than one would imagine. Side effects have continued to be minimal every time I use it, with the only real noticeable one being impatience with people – a common one also attributed with other focus boosters like Modafinil.

I currently still take about 20mg whenever I take fluorenol, but I haven’t determined yet what long term tolerance is like. If the tolerance build up and mechanism of action are similar enough to modafinil’s though, I imagine the progression there would be minimal – another valuable property for a eugeroic.

The one real downside I’ll point out is that the motivation increase present in modafinil is not quite as potent as with fluorenol, possibly because of the lesser degree of dopaminergic influence.

Once I get the chance to try even more eugeroics and alertness boosting nootropics, though, there will be even more factors to compare fluorenol to.

For this long-term trial of Fluroenol, I have been using NOOTRO’s Hydrafinil product, which is available here.

This concludes my first hands-on (and brain-on) experience with fluorenol – a potential alternative to Modafinil.

Here at Corpina, we’re working on reviewing even more of such substances, and will be back to report soon!

Fluorenol is the shit screw modafynal of the ither one once you doce on fluorenol the mind is opened to new avenues of thought and the way about hoing about the issue at hadd definetlty try it “fluorenol”
Dont use modafanyl that shit has bad side affects. Go Fluerenol #1 neurotropix we have access to FOR NOW.